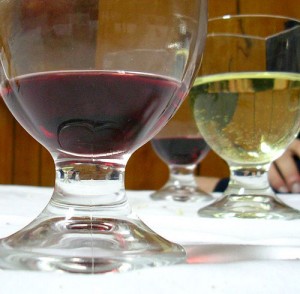 SAT grammar comparisons can be tricky. How do you figure out when to use “more” or “most” in a sentence?

You use “more” when comparing two things:

You use “most” when comparing three or more things:

Which do you like most: pink ponies, blue ponies or red ponies?

Lions or tigers (or bears)?

What about this question?

Between lions and tigers, the tiger is the (more or most) fierce.

I know it looks like there are many lions and tigers in the above sentence, but they are used as collective nouns – we consider them one group of things.

Between lions and tigers, the tiger is the more fierce.

What if we added bears into the mix? Would we use more or most?

Between lions, tigers, and bears, the bear is the most fierce.

I know – most of my students think it sounds weird too!  But read on for a great trick to help you remember the difference.

Other grammar comparisons: -er vs. -est

When comparing two things you use –er.

(See how “er” has two letters to remind you to use it for comparing two things?)

Sally was taller than Jane.

When comparing three or more things you use –est.

(See how “est” has three letters to remind you to use it when comparing three or more things?)

Of all the girls in the class, Sally was the tallest.

Between lions and tigers and bears, the tiger is (fiercer or fiercest).

Which is correct and why?