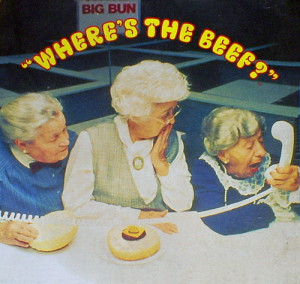 Back in the 1980’s, Wendy’s ran a hamburger commercial poking fun at their competitors’ large buns and small burger patties.

I feel the same way about some of the College Board’s SAT explanations: All bun, no patty.

First, let’s praise the College Board for making the 2014-2015 Official SAT Practice Test available for kids to download at no charge. Yay!

And they even offer full answer explanations for every problem. Yay!

And they’ve even partnered up with the amazing Khan Academy to provide further help with video explanations. Yay!

But they are lacking a little in the execution.

Here’s an example. This is question 13 from section 2 of the Official SAT Practice Test.

The College Board, bless their hearts, doesn’t provide much of an explanation.

Hm…I guess that is technically true.

But it’s hardly an explanation. Most of my kids would fall out of their chairs if I tried to explain this problem this way.

Maybe Kahn has something better?

13 Difference between number and square: This video features an official SAT practice question provided by the College Board.

Hmm – just a video of the prior explanation. It doesn’t make any more sense seeing it live.

You should see the confused questions after the video from kids asking for clarification:

I think part of the disconnect is that Sal Khan is a trained engineer; numbers and variables are part of his DNA.

But that’s not true for the average high school kid. Or even the brightest ones.

I’ve worked with kids all over the world – from the inner-city to the most-expensive private schools. I can think of 3 kids that I’ve worked with over the past year that would immediately grasp this explanation.

Kids (and beginners) need concrete examples first. Then they can backtrack into theory and generalities.

Putting the “explain” back into “explanation”

How can we make this question easier?

Let’s start with a concrete example.

What if we told kids to substitute numbers in for variables on these sorts of problems?

That knocks choices A and B right out.

How do we handle choices C through E? How do we turn those expressions into numbers?

Yep – substitute the number we picked for t, 4, into those expressions for t.

Here’s my explanation in video form

C’mon folks. We can do better for our students. Give them the simplest way to solve the problem – start with concrete examples first. (And this approach can be used with a variety of problems.)